Siri is one of the most useful feature provide in the Iphne 4S and iPhone 5 which could help you to operate your phone using your voice. This feature was provided to command your device by voice. But many time you could exeperience the difficulty using this device. Many time it could happen that Siri will be misunderstand what command you really gave him.

For example here I wanted to send a message to Abhinav Singh using siri but this is where Siri ended up:

This could have been a common problem you might have faced.

Today we will be helping to solve this problem by making the change in the command that Siri heard and guide it to get the correct command.

Whenevr you command the to Siri you will see the command displayed. So you can just Stop the Siri hearing first by tabbing on the siri first and then click on the command.

For continuong with the above example i just clicked on the command that Siri considered and here i am changing the name from DGunnaSingh to Abhinav Singh.

Once you are done with you changes you can click on the Done button as highlighted in the above screenshot.

so here I changed the name to Abhinav singh in the message and then went for the done button. So siri now got the correct command.

iPhones, one of the really helpful application siri can now be guided to understand the command given by yu correctly. Many time you would have experienced that the command you gave to siri was different from the one that he understood and followed. So you can just correct the command and make siri understand correctly what exactly command you are giving him to operate. 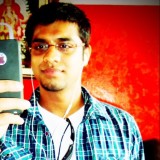 I am a tech geek who loves to be updated in the Gadget World and its my hobby to explore them and there features and applications. I blog about my interest to spread the awareness about the gadgets. Currently i am using an iPhone 4S

This site uses Akismet to reduce spam. Learn how your comment data is processed.